ORIGINS – song of Nooitgedacht, a remote valley in the Karoo

South African Country Life
No 189 April 2012
Book of the Month
A destination that she came upon by chance, but that at first sight instantly revealed itself as the project she had been looking for…
Based in the UK, Jennifer has repeatedly come back to explore and shoot every last ripple and rock in each mood and moment, at all times and in every season… Rather than cloud the experience with words, she’s chosen to let the pictures tell the story using minimal phrases that act like a guided meditation through the colour themes of earth, air, fire and
water… What’s captured here is the timeless magnificence and minutiae of the extraordinary desert that most of us simply drive through.
Nancy Richards

http://www.booksmonthly.co.uk/nonfic.html
Volume 15 No.3 March 2012
The front cover of this remarkable book suggests something other than what’s inside, pictures which range from wide-angle panoramas to macro-photographic images of rock beds and ancient tracks. The 92 colour photographs, carefully printed from Gough-Cooper’s 35mm images, capture perfectly the tranquil, peaceful setting, and her words, chosen carefully to simulate a poem in the form of a song, compliment those images to perfection. She is aware that the valley is defined by its geology: “the ancient bones of the earth, and blessed with life-giving, pure waters flowing from the mountains – the story that I have endeavoured to describe with my camera” and the resulting images show both her dedication and her competence as a photographer. She uses her camera to tell her story, her emotions shine through as she shares this remarkable experience with us. A bubbling stream metamorphoses into an abstract image of a rock surface, which some might find confusing, but in actual fact is utterly brilliant, as it examines the valley in terms of macro- and microbiology in equal measures. A coffee table book with a difference. There should be awards for books like this – if there were, this would be a clear winner. Outstanding photography and a unique perspective. Fantastic.
Paul Norman

Go!
February 2012
Interview with Kay-Ann van Rooyen
…I have particularly enjoyed this project in the Karoo, which has been like a voyage of discovery within a certain defined area. One could work for a lifetime in a place like this to understand its particular identity and characteristics.

The Sunday Times, South Africa
27 November 2011
…Gough-Cooper came back at least a dozen times to stay in and wander this spot… She got to know the terrain intimately, each etched, pitted, lichen-patterned stone surface, rippled, pebbled riverbed – until the pictures clustered together in her mind like a melody.
Nancy Richards

[The remote valley, Nooitgedacht in the Karoo, is captured in all its forms in the most breathtaking photographs by British photographer Jennifer Gough-Cooper. When you embark on this journey, experiencing the different facets of the valley, portrayed on each page of Origins, you are inspired to recall each poem, song and rhyme written about the Karoo in order to put this peaceful beauty into words. Each photograph expresses a different mood of the Karoo – transporting you from the mysterious mists, jubilant golden sunrises through to the setting sun’s outstretched rays as they gradually start to fade.]

The Weekend Witness
15 October 2011
A new book captures the beauty of the Karoo in all of its many moods.
Estelle Sinkins

The Good Weekend, Sunday Times, South Africa
2 October 2011
…The isolated region to which Jennifer Gough-Cooper took her camera for one of the year’s finest visual publications also goes through the variations of season and multi-annual cycles. The joy of Origins is that it takes us to that distant place in the Karoo, but also far beyond, to something we can vaguely designate as our “origins” defined and enclosed by magnificent geography, its fauna and flora and just a touch of human presence… On the face of it, there is the beauty of the natural environment that she recorded, showcasing its elegance with minimal interference and no visual artifice… Cleverly, Gough-Cooper deals with both the wide and panoramic, as well as the intimate and close-up. The latter often puzzle the eye and mind as bubbly stream turns into confusing abstract pattern, or rock surfaces take on imagery from other disciplines such as microbiology. These are visual paradoxes that underpin the lyrical framework she sets with words and quotations…”
Melvyn Minnaar

The Sunday Telegraph
3 December 2006
Just as photography at its best is a mélange of both art and documentary record, so sculptures cannot really be understood without looking at the space they inhabit and how they interact with their surroundings. In Gough-Cooper’s images, a Danaid, not merely collapsed, but bisected by a glass cabinet, projects a very different idea than it did when the purity of the white marble remained unsullied by interruption; small maquettes and trial figures mingled with antiquities and vases have a cheerfulness that belies their tortured poses; while the torso of Whistler’s muse plonked in front of an old-fashioned glass display case transforms the whole room suddenly into a grander vision… A delight.
Judith Flanders

The London Review of Books
5 October 2006
Jennifer Gough-Cooper’s recent photographs taken in the Musée Rodin with a hand-held 35 mm camera – the traditional equipment of the reporter or street photographer – are displayed in the [Royal Academy] exhibition. They are also published in a book… Few of them are straightforward records. Some are close-up details in which the ridges where sections of the mould meet slow the eye as it reads the form. In others the view through the case is interrupted by a reflection. In the pictures of marbles the texture revealed by soft, diffused light records both the grain of the stone and that of the film. All are a reminder of how far the look of things is a function of time and place.
Peter Campbell

Rodin’s Life Class
He was Michelangelo of the modern age, his work a mirror to the human condition. And in Jennifer Gough-Cooper’s photographs, the genius of Rodin is strikingly made flesh…
Rebecca Ley 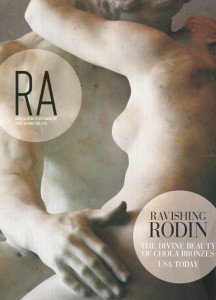 Cover: Rodin’s The Kiss, photographed by Jennifer Gough-Cooper at the Musée Rodin, Paris

THE NATURE OF PLACE

[A FRESH VIEW. The photographer Jennifer Gough-Cooper has seen the landscapes around Kloster Schoenthal with fresh eyes and in a new light.]

The Cape Times
3 May 1999
The photographs have been reproduced in a small book… a volume of supreme quality and is a collectible in its own right. It represents a creative and highly original view of Kirstenbosch… Gough-Cooper’s exhibition serves as a healing balm for our jaded eyes. It enables us to take a fresh look at the natural beauty around us in the Cape.
Leonard Shapiro

[It is the contrast and harmony between the plants in Kirstenbosch and the crags of Table Mountain – as well as the unique quality of light washing over them – that inspired Jennifer Gough-Cooper to take the series of photographs in this botanical garden.]